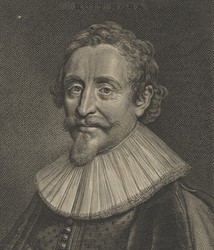 Hugo de Groot, known by his Latinised name Grotius, was born on 10 April 1583 in Delft, Holland. The child of a wealthy and educated family, Grotius received a humanist education, and displayed precocious scholarly talents, being admitted to the Faculty of Letters at the University of Leiden when he was only eleven years old. The world that Grotius entered at this tender age was extremely volatile. The United Provinces of the Netherlands had declared independence from Spanish rule in 1581 but did not emerge as a federal republic 1588. At the beginning of the seventeenth century the confederacy was deeply enmeshed in the great power politics being played out among Spain, France, England, Sweden and the Holy Roman Empire. At the same time, the internal politics of the United Provinces was deeply divided along dynastic and religious lines, with a major fissure emerging within the Calvinist faith community between moderate and orthodox wings, the former known as Remonstrants or Arminians, and the latter as Counter-Remonstrants. As masters of a wide variety of rhetorical genres - sermons, diplomatic letters, political propaganda, religious polemics, legal arguments, and ceremonial verses and orations - humanist scholars were immediately and deeply enmeshed in these conflicts. It was Grotius’s role in this regard that determined his life. In 1598, at the age of fifteen, Grotius thus joined the entourage of Holland’s leading politician and diplomat Johan van Oldenbarnevelt in undertaking a diplomatic mission to the royal court of France. Van Oldenbarnevelt was also instrumental in the creation of the powerful Dutch East Indies Company in 1602, on whose behalf Grotius would compose important legal defences, including his Mare Liberum of 1609. But it was Van Oldenbarnevelt’s leadership role in the Remonstrant faction of the Calvinists that was to have fateful consequences for both him and Grotius. The Remonstrants favoured religious toleration enforced by a secular state. When they sought to have their position endorsed by a synod convened by the civil government, they were opposed by the Counter-Remonstrants who sought to have Calvinist orthodoxy ratified by a purely ecclesiastical synod. As a result of the ensuing civil unrest, the Stadholder or prime-minister, Prince Maurice of Nassau, called out the troops and, on 29 August 1618, by order of the States-General of the Republic, Van Oldenbarnevelt and Grotius were arrested, along with Gilles van Ledenberg and Rombout Hogerbeets. The following year, Van Oldenbarnevelt was executed and Grotius and Hogerbeets sentenced to life in prison, the phase of Grotius’s life finding its terminus in his folkloric escape from prison in March 1621, in a basket of books sent by his wife Maria van Reigersbergen. After going into exile in Paris, where he was supported by government stipend, Grotius concentrated on his scholarship, composing his most famous work, De iure belli ac pacis, which was published in Paris in 1625 and brought him Europe-wide fame. Grotius returned briefly to the Netherlands in 1631, but was again driven into exile by his enemies, this time finding employment with the Swedish government which awarded him the high post of Ambassador to France in 1634. It was during his time in Paris that Grotius returned to his life-long concerns with issues of theology and church policy. Here he pursued the pipe-dream of a reunification of Christianity within a single church, and actively participated in polemical exchanges with Protestants and Catholics, the latter actively seeking the conversion of the prize scholar. In 1645 Grotius’s ambassadorship was terminated and he was recalled, unwillingly, to Stockholm. On this return journey, Grotius survived a shipwreck but, after a second voyage, to Germany, he fell ill, and died 28 August 1645, in Rostock, Germany.

The Dutch jurist Hugo Grotius (1583-1645) is widely regarded as having initiated a form of post-scholastic natural law that has been called ‘modern’ and ‘Protestant’. In the Prolegomena to his fundamental text, De jure belli ac pacis (The Rights of War and Peace) of 1625, Grotius appealed to the Aristotelian-scholastic conception of natural law — in terms of the conduct required to perfect man’s “rational and sociable nature” — in order to provide a natural-law basis for the right to war (JBP Prol. §§ 6-10). This is understood as the right to seek retribution for conduct that is unjust in the sense of infringing the convergent rights to self-preservation and peaceful sociability, whether between individuals or among nations (JPB I.ii.i) At the same time, however, Grotius refused to treat this natural law as man’s mode of acceding to the divine lex aeterna, regarding it instead as something acceded to via human reason, hence as something that might still be true even if God were not to exist (JBP Prol. § 11). Rather than prefacing a philosophical deduction of natural law, however, Grotius’s appeal to reason opens onto a wide variety of “a posteriori” humanistic forms of authority and evidence: exemplary arguments, sayings, and examples drawn from the pagan historians and poets, the Bible and the church fathers, presented in the form of an extraordinary copia or topological compendium (JBP I.i.xii). In a practice known as casuistical reasoning, Grotius uses these independent authorities in order to adjust the rule of natural law when its application is uncertain, and to show the degree to which the rights of war and peace had been shaped by the positive laws of sovereigns and by customary agreements between nations. In the case of civil law and state sovereignty, for example, Grotius does not follow the Thomists in viewing these as grounded in the “natural right” of perfecting man’s rational and sociable nature, treating them instead as arising from the banding together of independent families under a sovereign in pursuit of “public tranquillity” (JPB I.iv.ii). A similar pattern of argument is to be found in Grotius’s discussion of jus gentium or the law of nations. Grotius observes that the grounding of the right to war in the principle of sociability and its transgression, should mean that in any given dispute, only one of the claims to rightful war can be true. Given the inherent uncertainty of moral judgments, however, and given that the justness of an act always depends on the subjective intent of the agent, it might well be the case that both parties sincerely hold their cause to be just, as there is the possibility of an irreducible ignorance about the objective justness of the contentious act (JPB II.xxiii.xiii). Under these circumstances, says Grotius, when the principle of natural right is unavailable to those claiming it in a given case, one has to look elsewhere for sources of judgment. The most important resource in this regard is again the testimony of the pagan and Christian wise men, understood not as exponents of a philosophical principle but as masters of an art of political judgment, distilled from long practice and experience, and capable of being learned by modern counselors (JPB II.xxiii.iv). It was this adaptable humanist approach to natural law that permitted Grotius to intervene adroitly in disputes over the freedom of the seas, the rights of navigation, and the laws of prize and booty. In thus providing intellectual weapons that could be used against both domestic Calvinist theocrats and the supra-national claims of the Netherlands’ former Spanish Catholic suzerain, Grotius’s De jure belli ac pacis did so from within the framing interests of a medium-size Protestant maritime power engaged in constant conflicts with an array of trading rivals. This context is reflected in Grotius’s prime concern: to reconstruct the law of nations as a kind of legal casuistry for regulating the bellicose relations among rival sovereign states.